The following are accounts from the Dictionary of American Naval Fighting Ships and the memories of crew members.

The USS Hanson was launched 11 March 1945 by the Bath Iron Works Corporation, sponsored by Mrs. Harry A. Hanson, Lt. Hanson's mother. The ship was commissioned 11 May 1945 with Commander John C. Parham becoming the CO.

In August 1945 the Hanson was converted to a radar picket ship. Powerful radar equipment scanned the seas for threats long before they could be seen with the eye. The radar picket served as the long range eyes of a carrier group.

The Hanson sailed for the Pacific on 7 November 1945. She spent most of the following year operating in support of occupation forces in Japan. Reporting to the Atlantic fleet at Norfolk on 6 February 1947, Hanson trained along the East Coast until sailing in late January 1948 for her first tour of duty with the 6th Fleet in the Mediterranean.

Her radar was upgraded and on 8 March 1949 she was designated DDR 832. During her second deployment to the Mediterranean in the summer of 1949 she took part in two important peace conferences. As station ship to the United Nations General Assembly at the Isle of Rhodes, she was the only American warship present as Greece received control of the long contested Dodecanese Islands. Then she was chosen to transport United Nations mediator, Dr. Ralph Bunche, to Beirut, Lebanon for peace negotiations with Israel.

The year 1950 saw the shift of problems in geopolitics from Europe and the Mediterranean to the East, and the Hanson was transferred to back to the Pacific Fleet at Pearl Harbor on 12 July to prepare for her role in thwarting communist aggression in Korea.

Her first duty off that war torn country was participation in the brilliant amphibious operations at Inchon on 15 September 1950, and providing fire cover for the successful evacuation of Hungnam and Wosan just before Christmas of that year.

The Hanson's second combat duty to Korea, September 1951 to May 1952, took her along the east coast where she engaged in the fleet bombardment of strategic shore targets, in support of ground troops, where her accurate fire was most effective.

In December of 1951 she stood patrol in the Formosa Straits, serving as a buffer between Taiwan (Formosa) and the mainland. She also made one of her frequent visits to the British Crown colony, Hong Kong.

Returning stateside to San Diego, the Hanson enjoyed a respite and then rejoined the war in December 1952 joint task force operations screening the fast carriers as they launched the aircraft against enemy supply lines and positions. She also participated in shore bombardment, search and rescue operations, and patrol of the Formosa Straits. She returned stateside 20 July 1953. The ship received eight battle stars for its Korean service.

26 October, 1957 found the Hanson visiting Subic Bay, Philippine Is. when she was dispatched to Spratley Is. in the South China Sea to rescue some downed airmen. Spratley Is. is not much more than a huge coral reef. The ship arrived at Spratley Is. on 29 October. The men were found alive and well, except for one injured, and were taken aboard the ship. The Hanson then returned to Subic Bay on 30 October with the airmen on board.

During the 1957 deployment on a boring patrol of the Formosa Straits the hum-drum was shattered in the late hours of the night when a Russian cruiser bathed the Hanson in its searchlight. For many of that crew this was the first confrontation with an enemy. She also had a brief tryst with a Chinese sub on that patrol.

While patrolling the Straits of Formosa, within sight of the Communist mainland, in the fall of 1958, the Hanson witnessed the shelling of the off shore islands of Quemoy and Matsu, which some thought was the prelude to a mainland offensive against Taiwan. 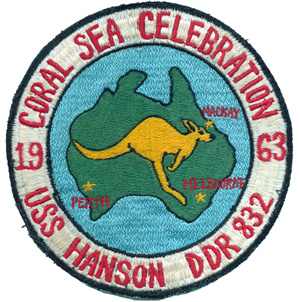 In the spring of 1962 and 1963 the Hanson participated in Australia's celebration of the Battle of the Coral Sea.

Mare Island Naval Shipyard was the site where, in the spring of 1964, the Hanson underwent a FRAM I conversion. The DD designation was resumed at this time. She remained in this configuration to the end of her U.S. Navy career. This conversion was completed 6 December 1964. In total the ship made 19 deployments to the Mediterranean and Westpac.

The ship rejoined the Pacific Fleet in early 1965 as a unit of Desron 11. She was assigned early that summer to the war in Southeast Asia. In July she shelled enemy targets ashore and, but for brief respites, patrolled and fought in troubled Vietnamese waters until late autumn.

Returning to San Diego in December 1965, Hanson operated along the coast of California until she deployed for the Orient on 17 July 1966. She steamed via Hawaii, Midway, Guam, and Subic Bay (her usual ports of call) to Vietnam and anchored in the Saigon River 13 September. The Hanson operated in the war zone until relieved on 6 January 1967. During the deployment her 5 inch guns fired over 9,000 rounds at enemy targets. She also pulled plane guard duty, patrolled the shoreline to interdict infiltration of supplies and troops from the North, and refueled helicopters. Returning to San Diego 11 February 1967, Hanson operated along the West Coast.

I was encouraged to submit this event to the website by Marty Sullivan. It is my understanding other crewmembers took pictures of this incident, but the Navy confiscated the film. The Diomid was operating near a floating dry dock and Hanson was trying to get a closer look when we collided. I went to great lengths to have the Russian lettering on the hull translated. It means "Rescuer" or "Lifesaver". This incident happened on Hanson's next to last cruise.

From other sources:
Pacific 05/06/71: The USS Hanson (DD-832) collides with the Soviet fleet tug Diomid in the Korean Straits, causing minor damage but no injuries. The Hanson conjectures the accident was caused by a deliberate attempt by the tug (with an icebreaker bow)to ram the Hanson. A sliding collision, however, was the only result.

In April 1972 the Hanson departed San Diego with only three days notice to fight the Tet offensive. Numerous accomplishments were logged during this deployment. Of note were:

Mr. Marty Sullivan reported this tattered flag flew on the Hanson during Linebacker II and Custom Tailor combat operations in May and June of 1972. During these operations in the North Hanson experienced frequent enemy fire and hits while doing night time shore raids. The most memorable raid was the shelling of the Haiphong airport days before the harbor was mined. Destined to be burned, the flag was rescued and preserved for posterity. We thank Marty for sharing this with us. 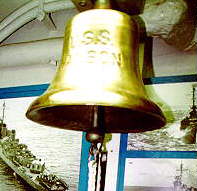 The Hanson remained a unit of Destroyer Squadron One, home ported in San Diego until 5 March 1973. On that day a reorganization within the Cruiser-Destroyer Force, U.S. Pacific Fleet, resulted in Hanson being administratively reassigned to Destroyer Squadron 23, a subsidiary of Cruiser-Destroyer Flotilla 11, home ported in San Diego. Commander Ian M. Watson remained in command until 31 March 1973 when the ship was decommissioned.

At 1000 Saturday, 31 March 1973 Commander Watson directed the Command Duty Officer of the Hanson to haul down the colors and secure the watch, thus ending 28 years of faithful service in the U.S. Navy. View Ceremony Program

On 18 April 1973 the Hanson was transferred to Taiwan (whose Strait she had so faithfully patrolled for so many years) and was commissioned the Liao Yang DD-21 in the Republic of China Navy.

Contributors Wanted
Got any historical information on the Hanson? We would love to hear it and added to this page.