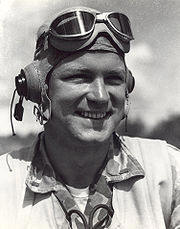 Marine 1st Lt. Robert Murray Hanson was born 4 February 1920 at Lucknow, India, the son of Methodist missionaries. He joined the Marine Corps' Aviation Cadet Program shortly after the outbreak of World War II and trained as a fighter pilot with the 25th Marine Fighting Squadron. He was commissioned a 2d Lt on February 1, 1943, and designated a Naval Aviator at NATC Corpus Christi, Texas, on February 19, 1943.

Hanson was credited with downing 20 Japanese planes, in six consecutive flying days. He shot down a total of twenty five enemy planes before his own crashed into the sea near Rabaul, New Britain on 3 February 1944, ending his life, one day short of his 24th birthday. He was also awarded the Air Medal and the Navy Cross.

He was posthumously promoted to Captain and awarded the Medal of Honor for shooting down six torpedo bombers over Bougainville in November 1943.

for service as set forth in the following CITATION:

For conspicuous gallantry and intrepidity at the risk of his life above and beyond the call of duty as a fighter pilot attached to Marine Fighting Squadron TWO FIFTEEN in action against Japanese forces at Bougainville Islands, November 1, 1943, and New Britain Island, January 24, 1944. Undeterred by fierce opposition and fearless in the face of overwhelming odds, First Lieutenant Hanson fought the Japanese boldly and with daring aggressiveness. On November 1, while flying cover for our landing operations at Empress Augusta Bay, he dauntlessly attacked six enemy torpedo bombers, forcing them to jettison their bombs and destroying one Japanese plane during the action. Cut off from his division while deep in enemy territory during a high cover flight over Simpson Harbor on January 24, First Lieutenant Hanson waged a lone and gallant battle against hostile interceptors as they were orbiting to attack our bombers and, striking with devastating fury, brought down four Zeros and probably a fifth. Handling his plane superbly in both pursuit and attack measures, he was a master of individual air combat, accounting for a total of 25 Japanese aircraft in this theater of war. His great personal valor and invincible fighting spirit were in keeping with the highest traditions of the United States Naval Service.