Archive
Archived from the original version of the Hanson 832 website

Bill McLay maintains the Roster and has been helping with the web site for several years now. His job is updating the Crew Roster and with that we'll let him tell you about himself.

"Let me say from the outset, I was never a computer savvy guy but when Byron Johansen contacted me with a request to help update the USS HANSON website mailing and e-mail list I was glad to assist Larry Newman and Marty to maintain the web site.

"My experience in the Navy included volunteering while in High School in 1944 for service during the latter part of World War ll. After training in new ship construction in Norfolk, I was assigned to the Ordinance Division to join the initial nucleus crew to bring the USS HANSON from Bath, Maine to Boston for commissioning in May 1945.

"During our commissioning, shake down cruises to Cuba and trip to Japan as part of the occupation forces after the armistice, I spent about 14 months on the HANSON. During this time I developed a life long relationship with Ernie Veller from Centralia, Illinois who was a fellow gunners mate on the HANSON.

"After separation from the HANSON in Sasebo, Japan in June 1946, I returned to my hometown Philadelphia to attend college under the G.I. Bill. After 46 years working as a designer and Professional Structural Engineer for Consulting Engineering firms in the Philadelphia area I retired in 1992.

"I have attended many of the HANSON crew reunions as a Plank Owner and enjoy keeping the crew mailing list current."

I, Larry Newman, conceived of and designed and created this USS Hanson web site and launched it in early 1997. I have been the Webmaster these past five years. I am now Webmaster Emeritus. You may be wondering why I have elected to put this web site up on the WWW. Let me tell you about my Navy history and perhaps you will understand. I come from a Navy family. My uncle started it when he served during World War II. Then all three of us Newman boys joined the Navy when we were old enough. I joined up in October 1954 and was ordered to the USS Hanson in December 1954, reporting aboard at San Diego the middle of January 1955.
I was assigned to the crew of the After Engine Room, where I became a FN and performed various flunky duties and served as Messenger on my watch. At that time Dave Bell MM2 and Don Shepherd MM3 were just about to muster out. Bob Morris MM2, stayed until 1956. Shorty Alumbaugh, then Norman Frid was the MM1 in the AER, while D.T. Love was the MM1 in the FER. Ensign Bootes was the Engineering Officer.

In 1956 I was transferred to the Forward Engine Room, now a MM3, and worked under Whit Whitaker. I thrived under Whit's mentoring and in June 1957 was advanced to MM2 and greater responsibilities. About one month before mustering out, while still on board the Hanson, I was advanced to MM1 and became a co-leader, with Whit Whitaker, in the FER. Shipmate Louis DeLancey FP2 was also advanced to FP1 at that time. We were both slick arm firsts. Not many of those around at that time. We did good Lou! 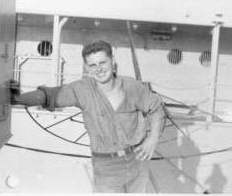 I made 3 WestPac cruises on the Hanson, 1955, 1956, 1957. Though I enjoyed my Navy experience, I resisted the efforts of Ensign Bootes to get me to ship over for another 4 years. Even when he dangled Officer's Candidate School in front of my young and eager eyes.

The Hanson was home for me, and possibly you, for almost 4 years. I have a lot of great memories in this grey head. I was 17 years old when I boarded the Hanson for the first time. I am now 67, and retired, you know, that age when most old sailors get nostalgic

Well, I decided to see if I could locate a shipmate, Pete Wallace. He and I had gone through boot camp together and were both assigned to the Hanson and served our time together on the Hanson. In my search for any clue to Pete's whereabouts I noticed there were many web sites for decommissioned Navy ships, and many of those were Destroyers. But, nothing for the Hanson, or so I thought. So, I went to work and designed a web site for the ship. (Until I retired, due to health, I owned and operated a computer sales and service business, which included web site design and internet marketing services.) By the way, I am still looking for Pete Wallace. If you know how to contact him please email me.

I had attended the first Hanson reunion in 1993 at Las Vegas, so I was on the mailing list, which put me in touch with Lou DeLancey. Lou has been most helpful in providing pertinent data, including photos, for this project. Thanks Lou!

While researching on the web for this project I came across Destroyers Online, an excellent resource. See the Links page for a link to DOL. Here I found a fledgling site for the Hanson, but not much was there. Richard McMichael, a Webmaster at DOL encouraged me to use what resources they had. I did, and they have served as the foundation of this site. Thanks Richard for your kind words of encouragement and the sharing of your resources!

Check them boots!
It was through DOL that I came across another shipmate, Richard Duffy. Richard has provided much help in the form of pictures, stories, and his antique memory. His works about as good as mine. :) Thanks Richard for your encouragement and the data and pics you have shared which help make this site meaningful!

And so...we now have a full blown web site for our glorious old tin can. It is a lot of work Webmastering one of these things, but when I get email from you guys expressing your gratitude for the site, it is worth every hour I have spent crafting and fine tuning the site. We are now into our sixth edition of the site, I hope you like the new look.

So...there you have it. Concise and to the point.

I would be pleased to get an email from you. If you are a former crew member and you do not appear in the crew roster on this site, please let me know who you are and let's get you posted!

Should it be, that in your reading of this my senility is exposed through faulty data, please be so kind as to jog my antique memory with the correct information. Thanks. :)